You are here HomeLifeStyleTheory of Human Needs Abraham Maslow

Abraham Maslow and Self – Realization person

It was in the twentieth century, between 40 and 50, when a new psychological current appears: the Humanistic Psychology.

Abraham Maslow (1908-1970), American psychologist, known as one of the founders and leading exponents of Humanistic Psychology, strongly opposed the predominant models until the time: model Behaviorist and Psychoanalysis. The Humanistic Psychology is a psychological current that postulates the existence of a basic human tendency focused on mental health. His posture is usually classified in psychology as a “third force”.

The best known work of Maslow is the Pyramid of Needs model posed a hierarchy of human needs, which satisfy the most basic needs or subordinate leads to the next generation of higher or higher needs. Thus, according to Maslow, the need is so if not covered or is satisfied, the person will get sick or die.

Maslow says that we have an innate tendency toward self-realization: the innate motivation of every human being to realize their potential by using their skills and abilities. That is, what moves us or the reasons we have to act is the will to have covered those needs we develop.

Therefore, to reach self-realization, we must satisfy lower needs to go up a level in the PYRAMID MASLOW. 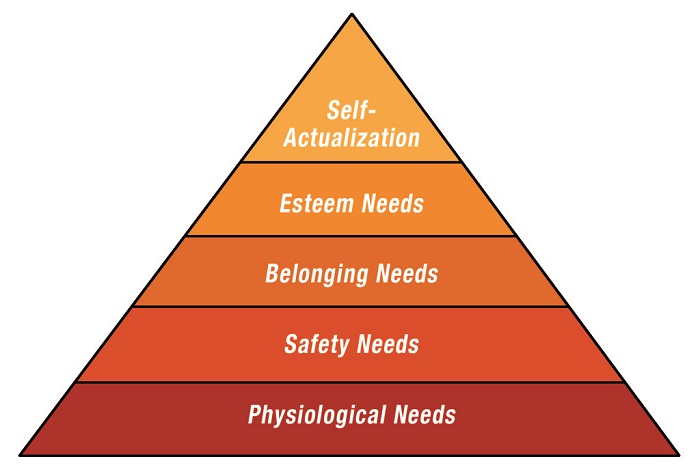 The basic idea of ​​this hierarchy is that the higher needs occupy our attention only when they have satisfied the lower needs of the pyramid. Growth forces result in an upward movement in the hierarchy, whereas regressive forces push prepotent needs down in the hierarchy.

In this way, we have to meet every need starting at the base of the pyramid, before the next need motivates us. Finally we reach the top of the pyramid: the self, a time of life where you feel happy and totally self – realized.

To meet the needs are three types of behaviors:

In practice, this theory is to seek a constructive behavior, avoiding the destructive and failed for each level of the pyramid.

Then we are going to explain with examples what each need and possible types of behaviors: Constructive, destructive and failed.

You may also like to read another article on Samathi4Life: The well-being also depends on economic stability

This is the lower level, where is the need to satisfy the most basic biological or physiological impulses, such as food or housing.

On the second level lies the need to live in a stable environment without threats.

In the third, the need for affiliation, interest in living in societies, to interact with others or have friends.

The following is the need for self-esteem, valuation and personal recognition.

And finally at the top level is the need for self-realization. You will note that these needs are prioritized so that first the most basic need to move up progressively to the need for self-fulfillment is satisfied, as above the pyramid, the more motivated is the individual.

You may also like to read another article on Samathi4Life: Information and advice on nutrition and exercise for lose weight

Many people agree on the operation of the pyramid according to Maslow, for we do not take care to the next step if the above is not covered, as people feel we always need more, that is, when we have, more and more want. But it has been seen that the fact of getting up at the top of the pyramid does not mean that the person has the satisfaction of having it all, because when we get a goal, automatically appear others that are further away, i.e. we always have to go climbing.

If you look with the country’s most underdeveloped I’m sure children have always had covered only physiological needs, when someone you meet the security needs and membership, often experience the same happiness that the person which it has always had satisfied these basic needs and one day reach the top of the pyramid.

Looking at this pyramid appears that a person who reaches the top should be the one experiencing great happiness, but not always, since a person can have highly developed the first three scales of the pyramid and be happier than the person who it is at the top. Since the latter has perhaps achieved the dream of his life, as being a model, but does not receive the same affection that the person who is continuing fighting for their dreams.

Also, with regard to the practice, it has been observed how people can have different behaviors while they are “escalating” the pyramid. Since the time to get some necessity may appear selfishness (only you think about the benefit of oneself) or empathy (think of others as he is climbing the pyramid) it depends on many factors.

Thus, the classification is good to know what position the person is, but it is also very important to consider the degree of satisfaction of each of these needs, whatever the position of the person at different scales, the conditions in which the person is, and behavior that used in the pyramid.