Rising standards of life standards, better health, increased knowledge of the importance of a healthy diet and regular exercise lead to increasing numbers of people getting the most from life until well into their 80s, even 90s.

But older people, particularly frail older people, are one of the population groups most vulnerable to accidents, especially in and around the house.

Those aged over 65 years old are most at risk, suffering from both the highest mortality rates and the most severe injuries. In 2009 in England and Wales alone, people aged 65 or over accounted for 7475 deaths in accidents, 49% of which were due to falls. Perhaps you’re worried about loved ones and think it might time for a carer? Search for Live in Carers near me at a site like https://www.liveincare.com/live-in-care-near-me

Of figures relating to A & E attendance after an accident at home, these showed that by far the single biggest cause of attendance was due to falls. In 2002, 2.7 million people attended an A & E department in the United Kingdom following a home accident, of which 1.2 million suffered from falling. Over-65s accounted for 19 per cent of the total number of A & E attendance due to home accidents, but 30 percent was down to an accidental fall at home.

The majority of accidents in the older age group also included more women than men.

Many accidents, both fatal and non-fatal for the elderly are caused wholly or in part to weakness and failing health. The result of this is a slowing down in reaction time and an inability to avoid hazards in time. Campaigns to highlight the hazards from unsafe habits can help make older people and their carers more aware and reduce the number of accidents. 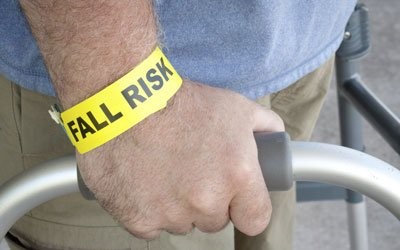 What injuries happen to older people?

The biggest number of accidents both fatal and non-fatal involve falls. Approximately 75% of falls in those aged 65 and over end up with injuries to legs, arms and shoulders. Older people are also more susceptible to hurting more than one part of their body, with a quarter of falls causing injuries on more than one part of the body, compared with an average of 16 percent among all age groups. One fifth of all falls in women over the age of 55 result in fractures or broken bones that require hospital treatment.

Whilst most falls do not result in serious injury, the inability to move then exposes the older person to the risks from both pressure sores and hypothermia.

Where do accidents occur?

The more serious accidents that happen to older people usually occur on the stairs or in the kitchen. The bedroom and the living room are also common locations for accidents in general.

The largest proportion of accidental falls is from stairs or steps with more than 60 percent of deaths due to accidents on the stairs. Fifteen percent of the falls are from getting up from a chair or getting out of bed and the same amount are caused by a slip or trip on the same level, for example, falls on a mat, carpet or rug.